Thota Vaikuntam in his art draws his inspiration from the rural environs of Telangana and the men and women who inhabit that space. Born in 1942 in Boorugupali, Telangana, Vaikuntam currently is based in Hyderabad. Vaikuntam completed a Diploma in Painting at the College of Fine Arts and Architecture, Hyderabad and then another in Painting and Printmaking from the Faculty of Fine Arts at Maharaja Sayajirao University, Baroda under the tutelage of KG Subramanian. His art tries to capture the vibrancy of life in his natal village through a detailed exploration of the men and women in the region. He is particularly fascinated by the sensuousness of the feminine form and traces this fascination back to his childhood experience watching travelling theatre groups in his village which had male impersonations of female characters. At first deeply skeptical of the sensuousness of his art which was very Indian in essence, Vaikuntam came into his own with a complete acceptance of this central aspect of his works.

Vaikuntam started his journey in art with charcoal drawings. While he was still exploring techniques, he came out with his earliest charcoal series that portrayed the life of the village he grew up in. It had everything from scholars, farmers, and devadasis to utensils, pots, doors. His earlier works were symbolic of the ethos of rural India. As his art evolved, so did his range of mediums. Along with charcoal on paper, he experimented with pencil drawings, transparent washes and finished some drawings with partial coloration. Even when he is working with the medium of charcoal, the sharp features of the women depicted in his distinctive style consisting of controlled lines and fine strokes make them instantly recognizable. The stylization of his painting is heavily influenced by the statuesque dancing forms of traditional Indian art, as seen in temple friezes. The upright and powerful torsos of Telangana women, Vaikuntam believes is different from the city dwellers and has held his fascination.

Hence his art is dedicated to deeper reflections on the Telangana region, the rhythms of a rural existence and especially the women’s vibrant existence. The Telangana women are the central figures in his art; he details their contour, their hues, the decorative motifs on their dress, their caste marks and hasta mudras, and their exquisite jewellery in his paintings. An instinctive artist, Vaikuntam highlights the flair and spontaneity of the women and the distinct demeanor of the elaborately dressed men of the region. The large red bindis set on turmeric-sandalwood foreheads, ornate nosepins and colourful Sircilla saris offset against the dark skin of the women have become signature motifs in Vaikuntam’s paintings and have become very famous within the Indian contemporary art circles.

Vaikuntam prefers an exclusive use of primary colours, as these are natural colours found around us, while composite colours do not exist naturally. He believes in using bright rich primary colours especially red, orange and saffron, which he terms as Indian colours,to give depth and character to his central figures. The women and men in his paintings look larger than life, filling his small frames. He uses small patterns to illustrate the garments and ornaments setting his central motifs in vivid pigments. His placement of form without illusionistic depth and the repetition of central figures are reminiscent of the folk paintings, yet his restructuring of the form is very contemporary in ethos.

Vaikuntam thus is an acclaimed artist with a very distinctive style and as deserved is a recipient of several honours including the National Award for Painting, received in 1993, the Biennale Award from Bharat Bhavan, Bhopal, received in 1988-89 as well as the prestigious national honour of Padma Shri. He has also created sculptures which reflect his style in paintings, set apart in its formal elements with the unique Vaikuntam signature style. He has also worked as an acclaimed art director for the films like, Maa Bhoomi, Matti Manshulu and Daasi, which received a National award. 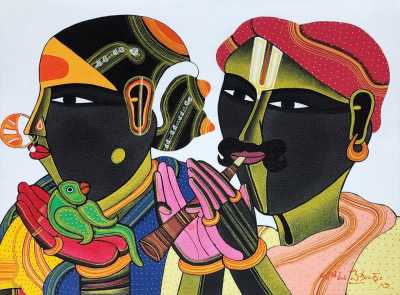 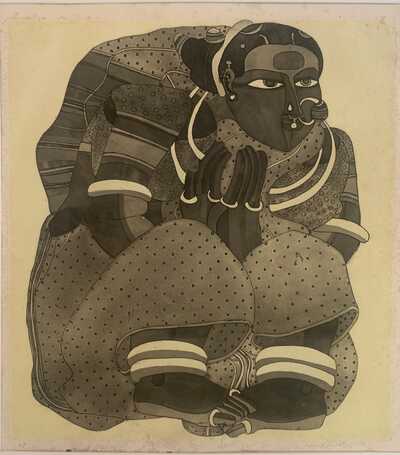 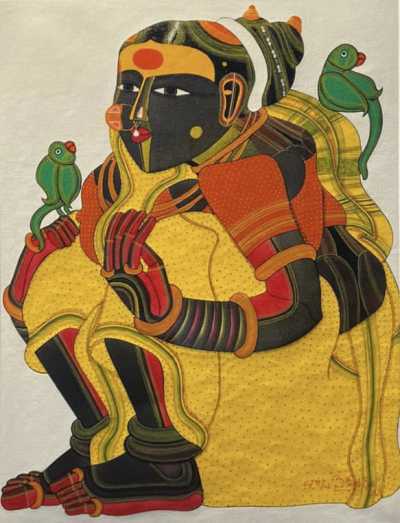 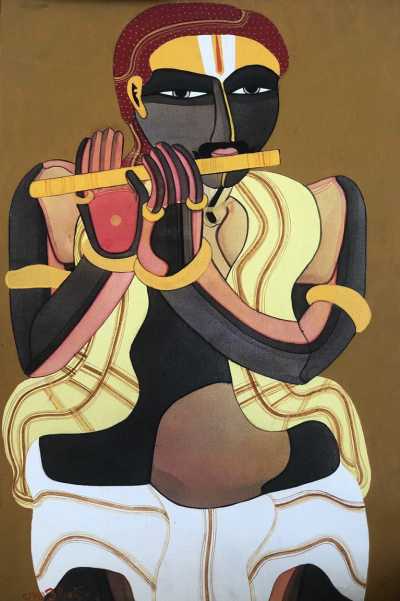 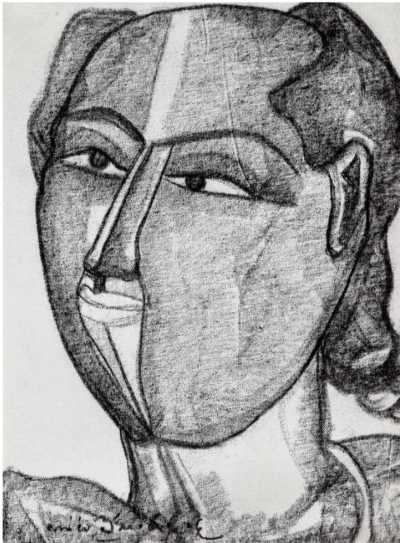 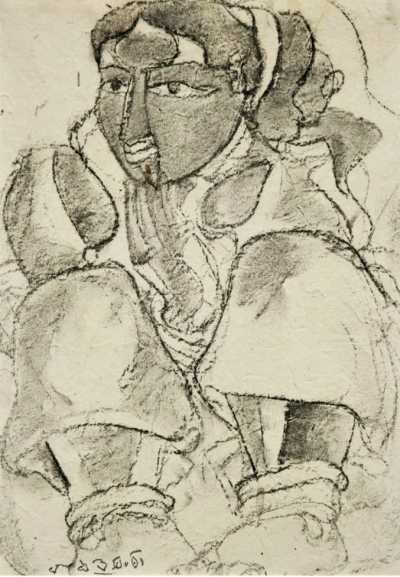 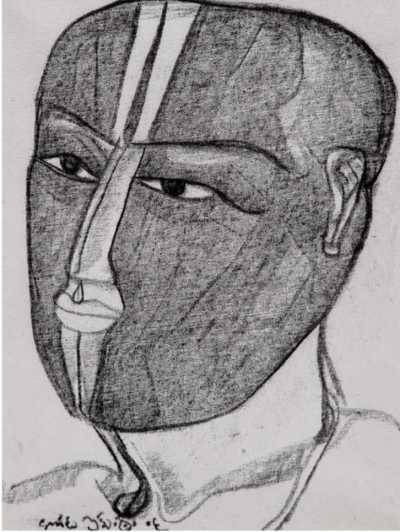 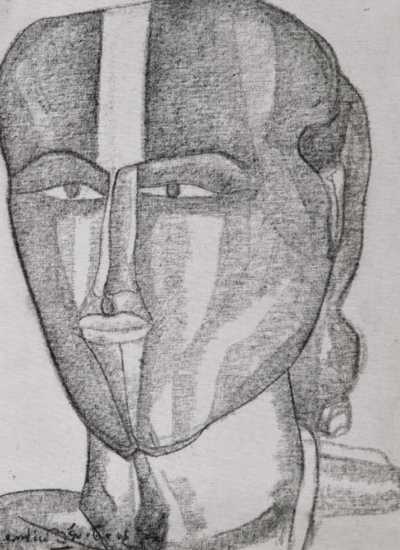 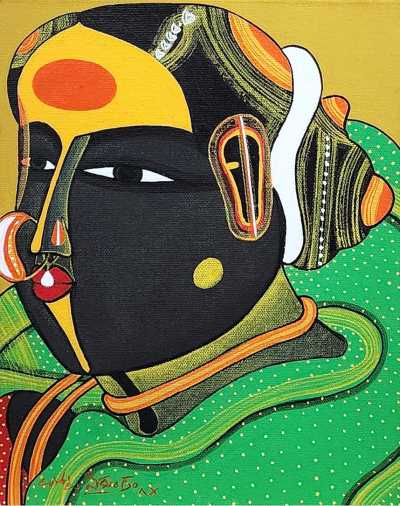 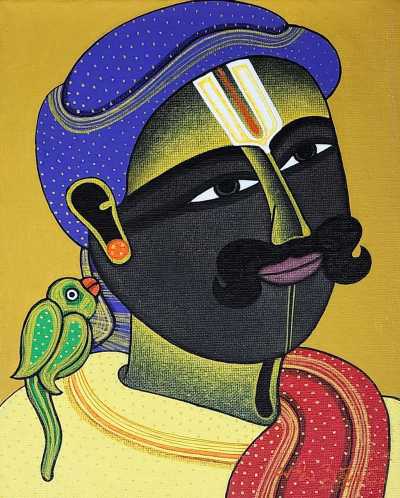 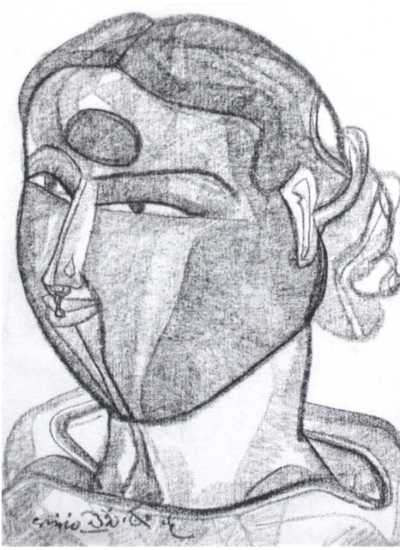 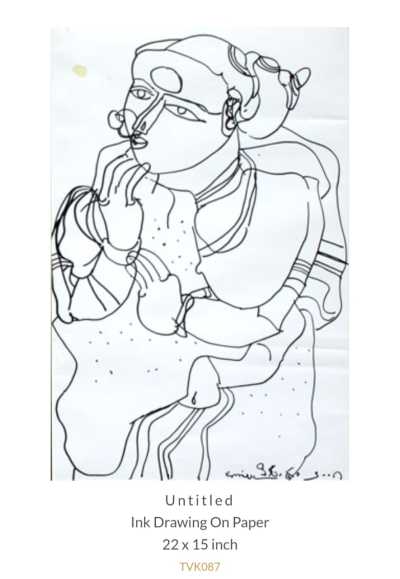 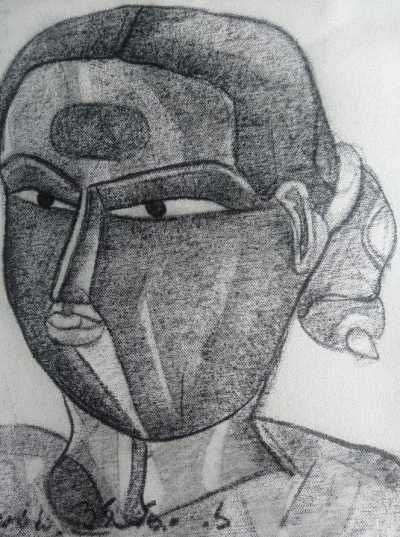 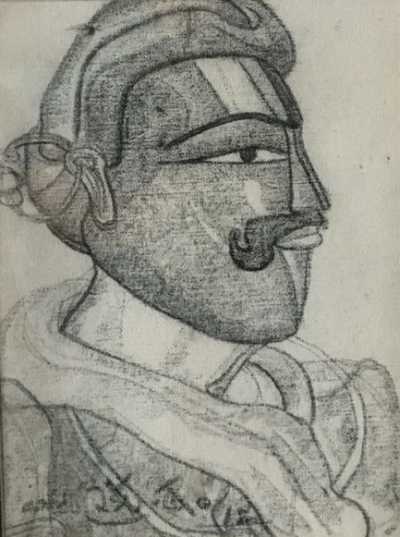 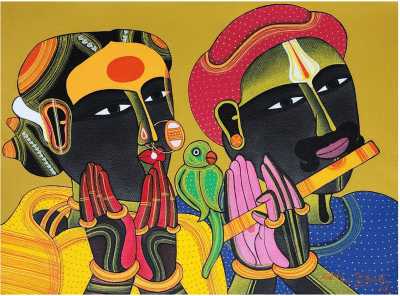