Laxma Goud is an artist who unabashedly explored the erotic while placing it within the quotidian as well as the rustic. Born in 1940 in Nizampur, Goud derives inspiration from his childhood in rural Andhra Pradesh, India. He grew up watching traditional leather puppetry and creation of terracotta and the relaxed environs of his childhood with its unbridled vivacity permeated him to later be translated into art on canvas. K. Laxma Goud received his diploma from the Government College of Art and Architecture in Hyderabad, India, in 1963. He went on to study mural painting and printmaking at M.S. University in Baroda, from 1963 to 1965. But he made a return back to Nizampur, and this return had a huge impact on his art.

Goud was impressed by the ribald humour and earthy vitality of the villagers which was devoid of any trace of self consciousness. The close society, the intimacy with animals, fields and farm fostered in him a sense of harmonious unity. This he found to be in stark contrast to the rigid puritanic sexual mores of Indian middle class in the cities. He captures this sexuality in his painting with a sense of humour , where he transforms his characters from man into goat, goat into woman, and man and woman peer lustfully at each other. He also places them within a landscape that is typically lush and wild, where men and women are clad in vivid clothes, bejeweled in traditional tribal ornaments, shape shifting into the surroundings and each other. While Goud portrays the quotidian life of village folk, it is painted with an element of fantasy and an underlying libidinal force. As Goud has said, “there is eroticism in nature itself.”

Goud’s art is deeply nostalgic and surreal in nature where he tries to immortalize in art a way of life that is threatened by an onslaught of urbanization. In this endeavor, Goud has experimented with various types of media, from traditional oils, to watercolor, pen, ink, colored pencil and etchings in his two-dimensional work, to a series of bronze and terra cotta sculptures he produced near the turn of the millennium. For example the nostalgia is captured in its essence in his small paintings on village existence which are in the monochrome greys. Later as colour became important in his art, the new thirst for color pushed Laxma towards reverse painting on glass. Laxma’s mentor K.G. Subramanyan was among the first to experiment with reverse painting and adapt it to available pigments and transparent surfaces including plastics. Laxma with his penchant for technique, found himself enthralled by the process. His love for printmaking is also legendary and he has played an important role in its expansion, especially in etching and aquatints. His incisiveness, the hatched lines and above all his versatility has become his trademark. In his later life he atrted experimenting with mural making and clay sculpting as well.
The goat is a recurring image in Goud’s art. Goud was born in Telangana’s toddybrewer caste. The family kept buffaloes and a herd of goats whose shapes, movements and antics were Laxma’s earliest inspirations and models. In his own words “…the goat is like a life companion. Its mute presence fills in the life and brings a kind of dexterity in art...” Similarly the feminine form has held deep fascination for Goud which is seen in his series on Shakti. From the idol of Goddess Durga to the village women in his paintings, the artist invokes and celebrates the element of shakti in womanhood. The artist paints dynamic and empowered female figures, which take pride in their sexuality and are fearless. He has had several solo shows throughout his career and has remained prolific in his creations. He has been awarded with many accolades, including the Padma Shri in 2016 as well as the Telangana State’s Prafulla Dahanukar Lifetime Achievement Award in 2015.
He currently lives and works in Hyderabad, India. 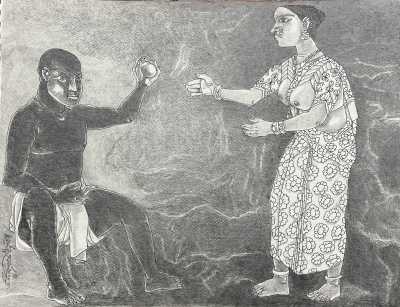 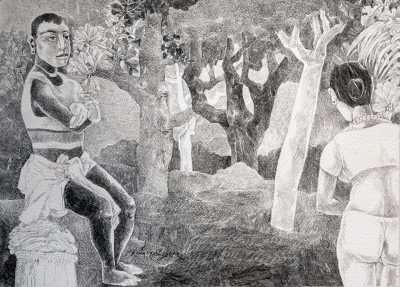 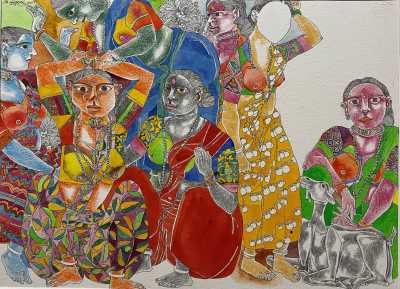 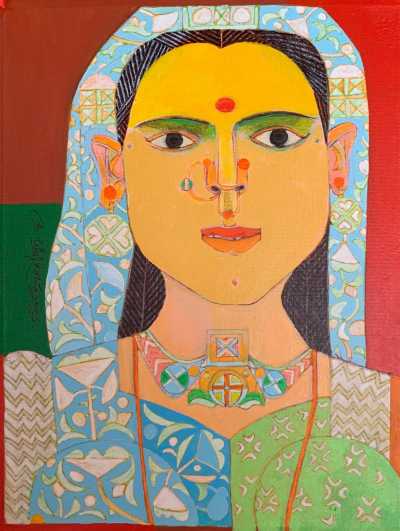 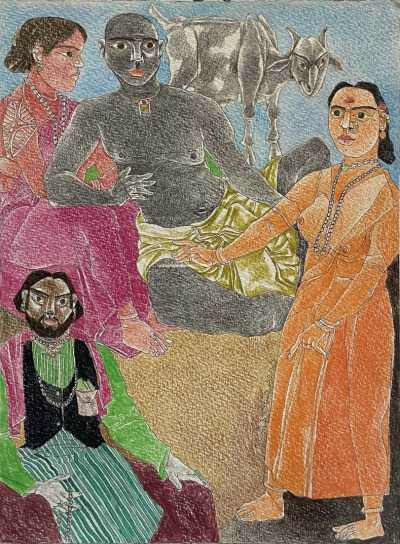 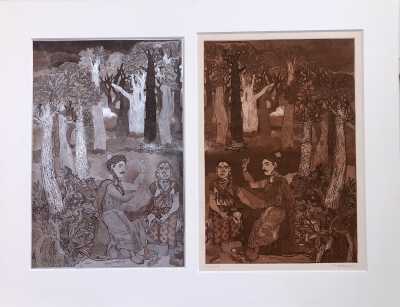 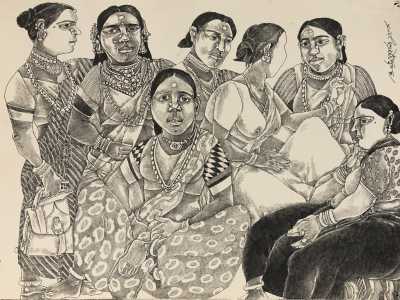 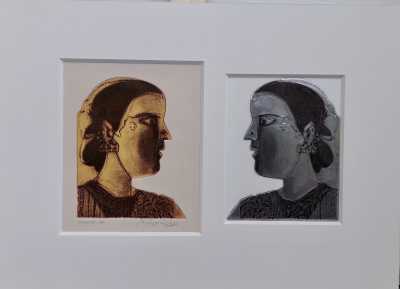 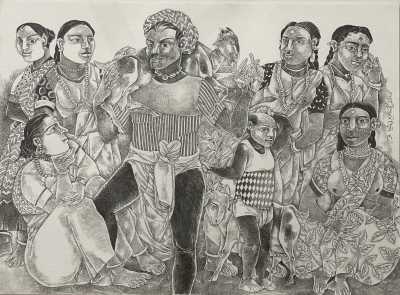 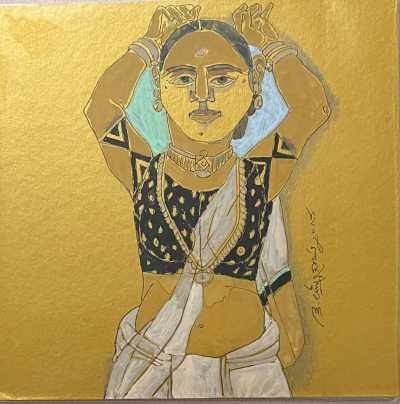 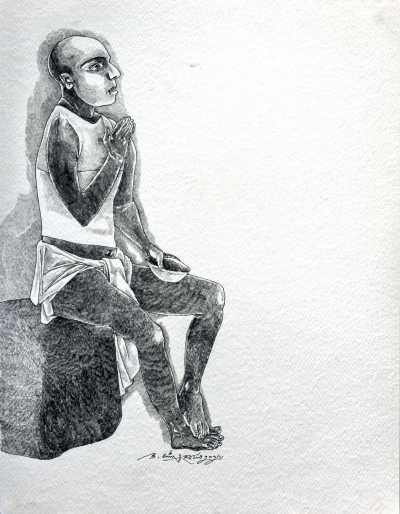 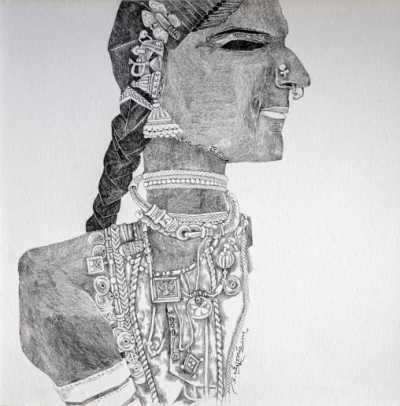 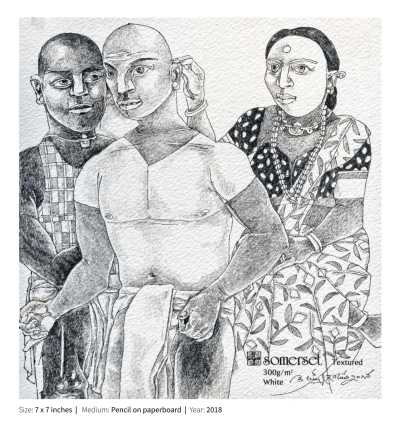 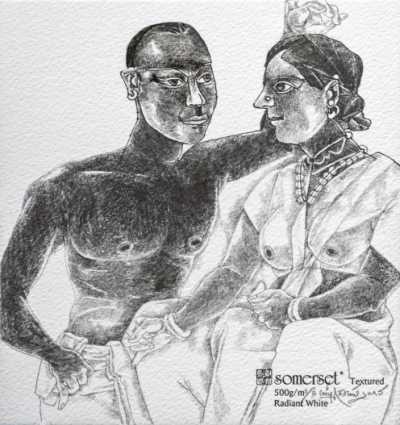 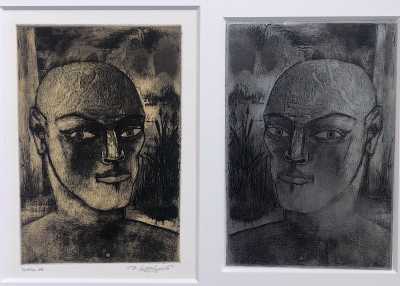