Krishen Khanna, 90, is one of the surviving pillars of Indian contemporary art and a core-member of the influential Progressive Artists’ Group founded by Souza in the 1940’s. With his colleagues, he belongs to the generation that experienced painting and independence, painting for independence and painting from a position of independence. Krishen Khanna is not only prolific artist but also has influenced the art paradigm of India, capturing with brilliance and accuracy the vibrant hues and passion of a diverse nation.Khanna’s paintings, which are in major international collections, depict an everyday Indian life with all its trials and tribulations. He sold his first painting to Dr. Homi Bhabha, for the Tata Institute of Fundamental Research in the 1950s; and has stuck to painting ever since giving up the job as a banker.

Born in 1925 in what is now Faislabad in Pakistan, Krishen Khanna grew up in Lahore, only studying art after he graduated from college at evening classes held at the Mayo School of Art there. In 1947, Khanna’s family moved to Shimla as a result of the Partition of India and Pakistan. A largely self-taught artist, Khanna studied at the Imperial Service College, Windsor, England, from where he graduated in 1940. After his family's move to India, a job with Grindlays Bank brought him to Bombay where he was invited to be a part of the now famous Progressive Artists’ Group. The first exhibition in which Khanna’s works were featured was one of this Group’s exhibitions held in 1949. In 1955, Khanna had his first solo show at the USIS, Chennai, and since then has been exhibiting his work widely in India and abroad.

Khanna’s favourite colour-palette, he says, is the Indian yellow. It has a very large range and scope he says adding “it’s a great colour”. It can also be transparent. Indian red, too, appeals to me.” He says.

Khanna’s themes have been myriad. Khanna’s paintings blend the abstract and the figurative which are at times misty and sometimes hazy. His imagery has been described as “a prism through which figures can be faintly discerned”. He has depicted displaced, distracted figures that he had observed with sadness during the Partition; people spending their days on Indian pavements; figures reading newspapers and sipping chai; India’s trucks and dusty vehicles rattling along and Christian themes such as the last supper, the Crucifixionand the events after that.

In 1964, Khanna was artist-in-residence at the American University, Washington D.C. In 1965, he won a fellowship from the Council for Economic and Cultural Affairs, New York following the travel grant they had awarded him three years earlier. Recognising his immense contribution to Indian Art, the Government of India has bestowed several honours upon him including the Lalit Kala Ratna from the President of India in 2004, the Padma Shri in 1990 and the Padma Bhushan, Government of India, 2011. 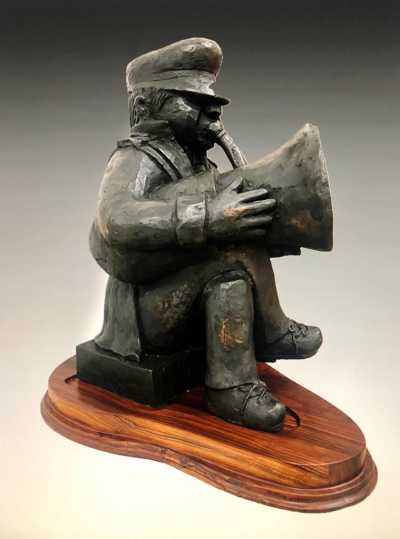