Sohan Qadri born 2 November 1932, in Punjab died 2 March 2011, in Toronto, Canada was a yogi, poet and a painter from India who has lived in Copenhagen for the past 30 years. His paintings result from states of deep meditation, and are informed by the colors of India:luminous, dye-infused works on meticulously serrated paper.

Combining spirituality and art, Sohan Qadri invokes a vision of meditative tranquillity through vibrant motifs in his paintings. Often eschewing conventional paint mediums, Qadri is known to create ink and dye works on paper that evoke the rich colours of his birthplace, India. The Copenhagen-based artist was introduced to yogic practices at the young age of seven. His early years spent in India, where he met and was influenced by two wandering mystics, informed his aesthetics and later work. Qadri’s paintings are hybrid marriage of Tantric imagery and late modernist minimalism, earning him the title of the “Tantric yogi artist” from Francis Newton Souza, one of India’s leading Modernists.

Although he began his career in the 1950s painting in oil on canvas, he worked on paper almost exclusively from the 1980s. In his process, he covered the surface of the paper with structural effects by soaking it in liquid and carving it in several stages while applying inks and dyes. The striated two-dimensional paper was ultimately transformed into a three-dimensional medium. The repetition of careful incisions on the paper was an integral part of his meditation.

Qadri received his MFA from the Government College of Art in Simla. He began travelling around the world in 1965, to Paris, Zurich, East Africa and North America. Qadri has had over a hundred solo and group exhibitions in India and around the world, including the United States, Canada, Switzerland, Denmark, Germany, Sweden, Austria and Poland. His works have been included in numerous collections, including those of the Peabody Essex Museum, Massachusetts; the Rubin Museum of Art, New York; the National Gallery of Modern Art, New Delhi; the Los Angeles County Museum of Art, California; the Royal Ontario Museum, Toronto; as well as the private collections of Cirque du Soleil, Heinrich Böll and Dr. Robert Thurman.

The artist passed away in Toronto in 2011. 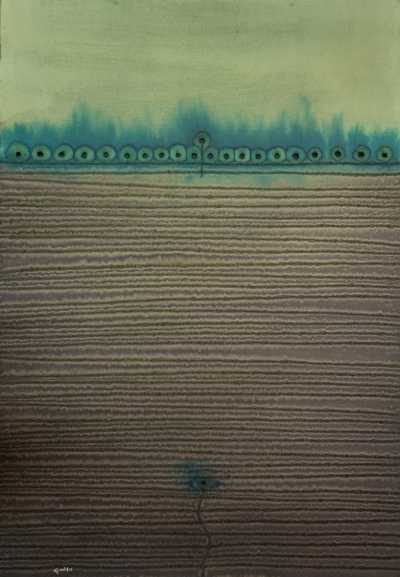