Born in 23rd October 1982, Muktinath Mondal completed his B. F. A. in 2005 from Indira Kala Sangeet Viswa Vidyalaya, Chhattisgarh and M.F.A. in 2007 from the Hyderabad Central University. As an artist, Muktinath acts as a protagonist and tells the unheard stories of his culture. He weaves his
stories with colours, rubbed brushstrokes, local elements, sculpture and a wide range of mediums. Being a perfectionist by nature, his works have their own requirements to be represented. Whenever he plunges into his past, he always finds a fresh green water hyacinth, or a courtyard partially
covered with cow-dung or the mundane lives of people and their rituals and myths. On shifting to an urban landscape, he realised it’s bleak reality. All these political, social, economic and cultural agendas paradoxically surface in his works, consciously and subconsciously, through various images and
narratives. He feels a responsibility to preserve his culture. His subjects have been oscillating between human gluttony and its perilous repercussions. Through his works, he compels people to self reflect and act. He has been part of several group exhibitions and has had many solo shows in India.
The artistlives and works in Kolkata. 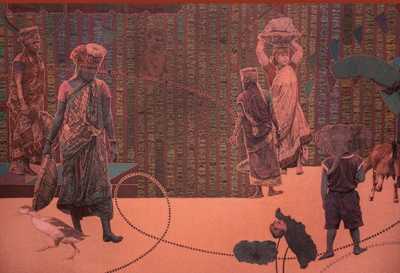 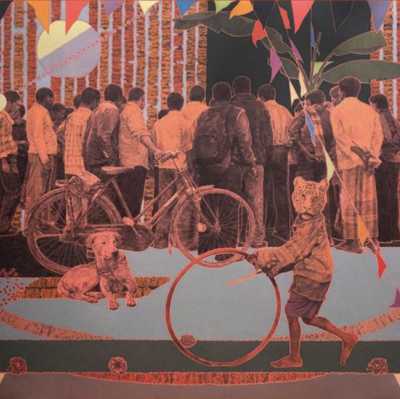 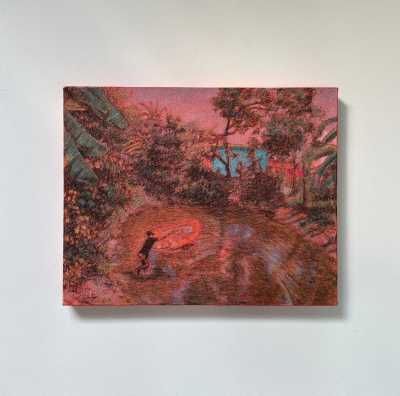